× Welcome to the CPL Aerodynamics question and answer forum. Please feel free to post your questions but more importantly also suggest answers for your forum colleagues. Bob himself or one of the other tutors will get to your question as soon as we can.

So, equilibrium is a fairly simple statement but I do have a question about a statement on page 7 of the aerodynamics text

If equilibrium means there must be a balance between all forces so that no one force succeeds in changing motion , in the situation where an aircraft is in a straight ‘climb’ at a constant speed wouldn’t the lift being created be greater than the weight resulting in an imbalance between forces. In my mind I keep falling back to this not being a state of equilibrium although there is a statement that mentions speed and direction must change I think this is what is confusing me

The other thing that I am sure has something to do with it is motion vs relative motion as once an aircraft is in a state of climbing then the motion becomes relative I guess.

Any help on explanation would help

When we talk about the balance between forces, we are considering ALL of the forces acting. When an aircraft is in a climb, the forces acting to lift it are BOTH thrust and lift - not just lift alone. The forces acting to resist the climb are BOTH weight and drag, not just weight alone. The combined effect of lift and thrust (the resultant, R2) is exactly balanced by the combined effect (the resultant R1) of weight an drag. The sum total of all of the forces cancels out and there is no 'left over' force. In fact, in a climb lift is actually LESS than weight and thrust is GREATER than drag. It's the resultants that cancel out. (R1 is exactly equal and opposite to R2). 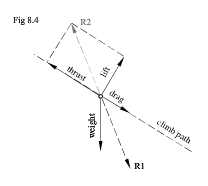 I don't have a copy of Bob's text so my comments are generic rather than specific to his document.

If equilibrium means there must be a balance between all forces

Plus all moments (or torques, if you prefer) are balanced. The result is that the body under consideration doesn't accelerate (ie maintains its speed and direction) nor does it turn or tumble.

The overall picture has to be considered .. it is not valid just to think about lift and weight. The following sketch is a typical description

ALL the forces have to be resolved into components (either horizontal and vertical as in the sketch or along and perpendicular to the flight path) and the various components added to see what results. If the two sets of forces all balance out, then the forces are said to be in equilibrium and the aircraft will continue along on its merry way at the same speed.

All motion is measured relative to some observer's position. This may be on the aircraft, from the ground, from another aircraft .. whatever. I think you have gone off on a tangent somewhere with this one ?

Perhaps if you ask some follow up questions we can sort the problem out progressively.

I see that Bob beat me to the punch with his answer. .
Engineering specialist in aircraft performance and weight control.
4 years 6 months ago #3

Thanks for taking the time in explaining. Between your response and Bobs it makes sense
4 years 6 months ago #5