× If you are studying for your BAK or PPL exams and need some help, please post your question here. Someone on the forum is bound to help you as soon as they can.

It appears that my optimism may have been misplaced a tad.

A straightforward engineering review of the sheet indicates that it (probably) has been drawn in a graphics package but using routine manual techniques rather than exploiting the package's capabilities. Further, the POH Section 6 instructions introduce needless error and are not really appropriate.

(a) the various trim lines are not all that uniform in their scaling. Easiest way to show this is to overlay (within my graphics package's capabilities on this computer) a reasonably precise scaling reference grid. The following graphic, if you zoom in a bit, will show some variation in the trimsheet's scales. Not significant, considered in isolation, but each "error" adds up during the completion of a loading example. 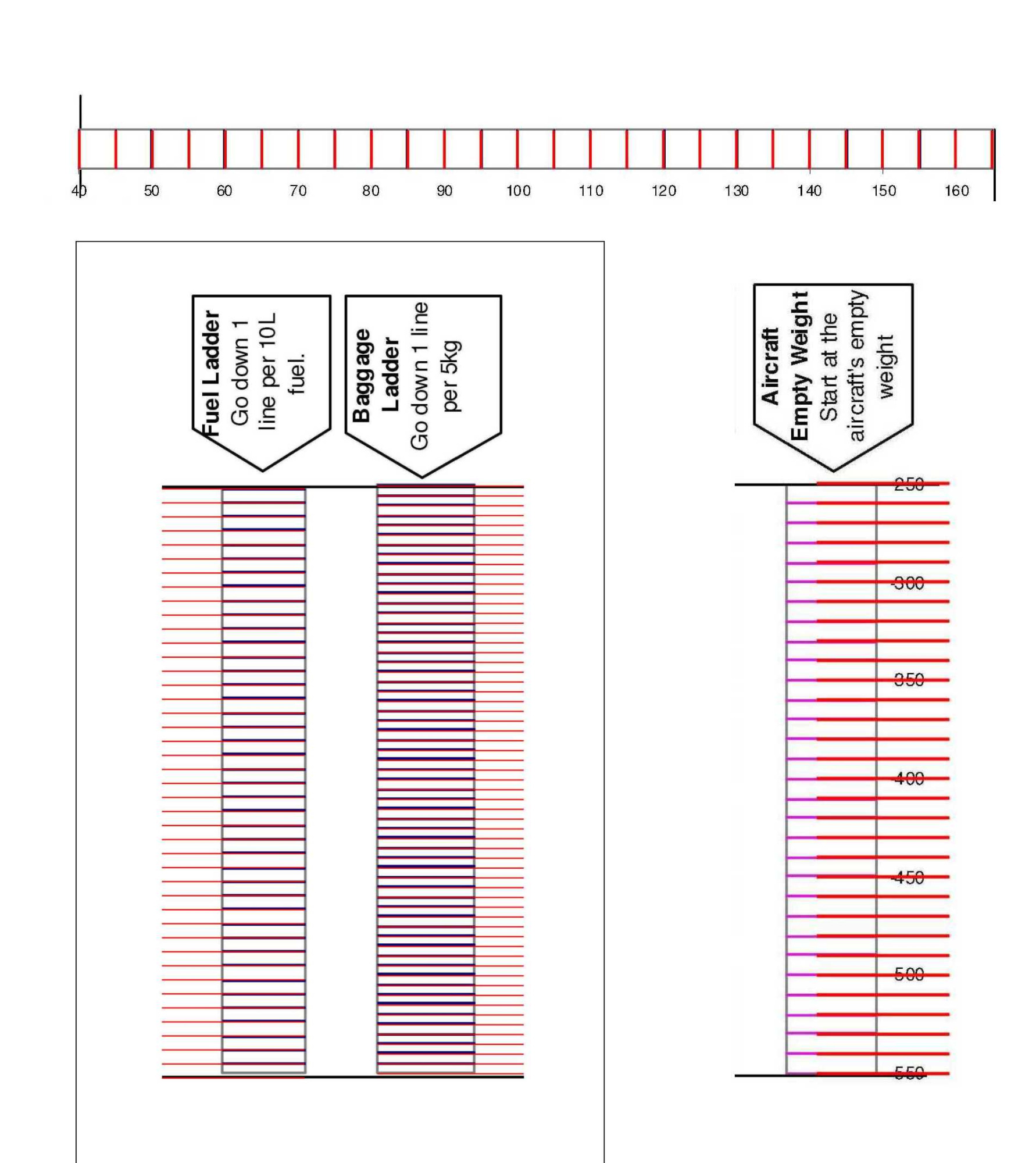 (a) the POH instructions prescribe rounding of crew, baggage and fuel loads.

The following completion example uses empty data 280/55.8, crew 94, bags 7, and fuel 54 litres at 0.695. The result indicates that the longhand calculation does not agree well with the trimsheet. 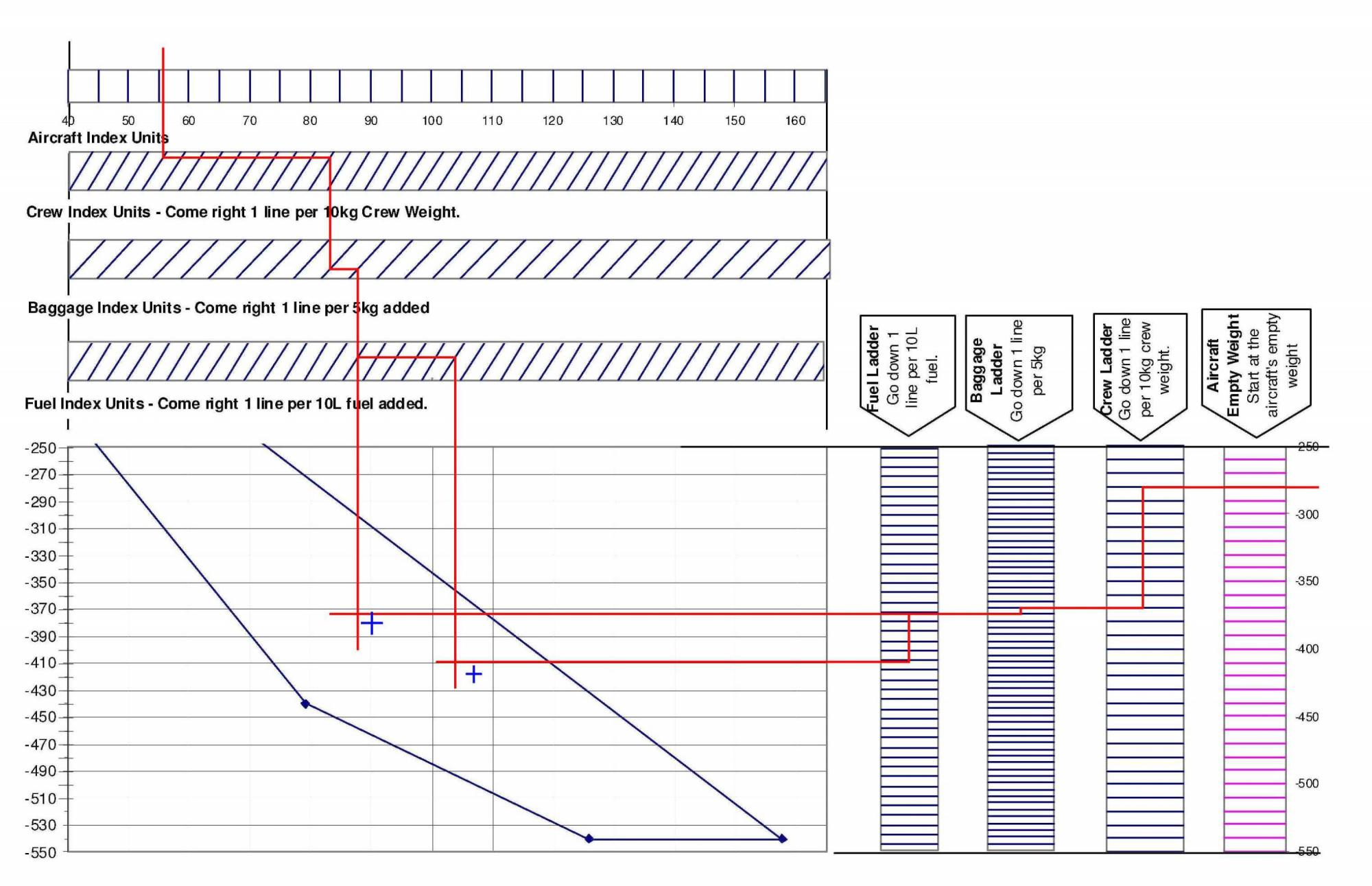 I have no idea who designed or approved the trimsheet. Had it been presented to me for checking and approval, it would have been sent back to the design office for substantial rework. The basic test, at the end of the day, is that the longhand calculation's integrity is maintained by whatever alternative loading calculations might be proposed. No point designing a new mousetrap if it doesn't do a better job than the old one ..

In addition, the POH Section 6 would benefit from a revisit and rework.
Engineering specialist in aircraft performance and weight control.
3 years 9 months ago #61

Maybe I'm missing something here. The trim sheet entries are different to the problem values. For instance, the crew load of 94 kg has been entered on the sheet as 90 kg.
3 years 9 months ago #62

Perhaps you glossed over a comment earlier ? The reference to the POH instructions specifically concerned the instruction to round off the trimline entries.

If we were to ignore that instruction and redo the sheet, interpolating as required, we would get a much better result so far as the trimsheet/longhand calculation discrepancy is concerned - 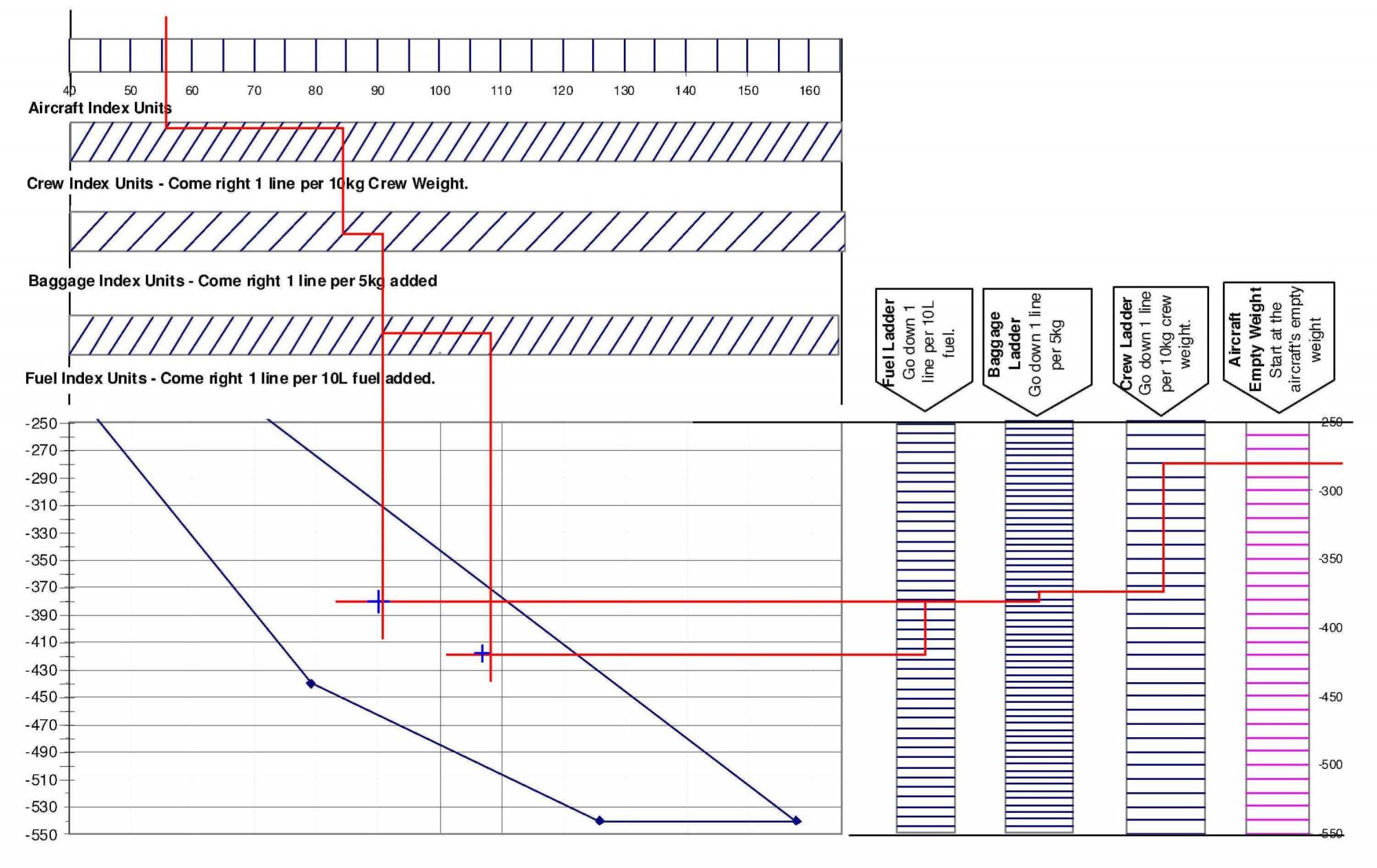 This still leaves the matter of the use of a "standard" SG in the trimsheet. If we were then to rework the example for the weight, rather than the volume, the discrepancy reduces a bit more for the ramp loading case - 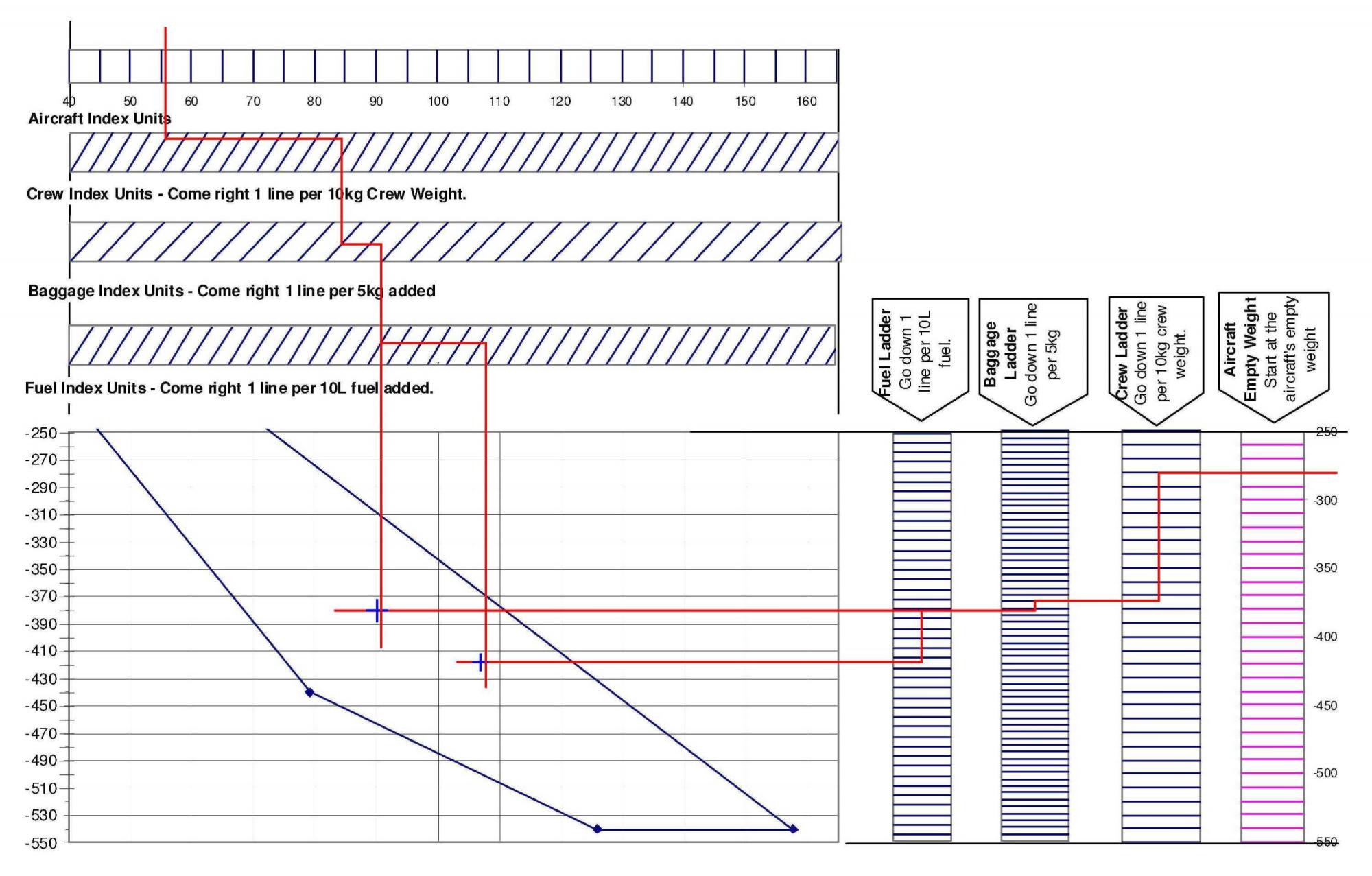 Now, all it would take is a bit of redrawing with a bit more care and accuracy and the trimsheet would be acceptable from a technical point of view.

As indicated previously, however, there are numerous undesirable HF/CRM and SOP/flight standards aspects which make the sheet undesirable from an operational point of view. However, we'll leave discussion of those points until the end of this series of posts.
Engineering specialist in aircraft performance and weight control.
3 years 9 months ago #63

The basic test, at the end of the day, is that the longhand calculation's integrity is maintained by whatever alternative loading calculations might be proposed.

How does this comment fit in with the need for "curtailment" which you described before ? Also, I have been reading elsewhere on a technique called the adjusted weight method. The detail is very sparse but it appears to introduce deliberate errors while giving some sort of advantage which I haven't worked out so far.
3 years 9 months ago #64

If we look at a fairly basic calculation, where the loading arms do not alter during flight, then the trim sheet should produce the same result as the longhand calculation for all intents and purposes. This, certainly, would be the case for, say, a small trainer where the occupants have no likely means of moving during flight.

However, as the aircraft gets a bit bigger, things start to become a little more complex. Take, for instance, the case of passengers moving to and from the WC or along an aisle for whatever purpose.

Were the calculations to be done by the standard longhand method, this would need multiple calculations to cover the CG variations in flight. Such a practice would become rather unwieldy. To cover this increasing complexity, the practical way to address in flight CG variation is to run some appropriate sums and then constrain the CG limits to ensure that, while the calculated CG might come with an error, the actual aircraft CG is maintained within the AFM/POH limits as prescribed. This is the basic thrust of what curtailment (the favoured US term) means. Whether the sums are done by longhand or trim sheet, the result will be the same with the same error associated with whatever problem exists. The same workaround (curtailment of the envelope) is what gets us out of the problems.

Generally, this process creates no problems. The only concern relates to using the calculated CG to set the takeoff stab trim for jets but, even then, a small variation in stab trim setting isn't going to create a significant concern.

The adjusted weight method is a quite clever technique developed by Peter Saunders, a Boeing weights engineer, in the 1960s. At that stage, the Industry was faced with the introduction of short haul jet operations. One of the problems with short haul, compared to international long haul, is that the turnarounds are far more rapid .. aircraft make money flying, not sitting on the ground.

So now, the weights folk in the airlines were faced with having only a few minutes, rather than, perhaps, an hour, to run the loading calculations. Keep in mind that electronic computers in general use was still some years away, so the existing long hand calculations (generally run with mechanical adding machines) became a major bottleneck.

During this period a great deal of development in loading system techniques occurred. However, given that many people are resistant to change, Boeing received a number of requests for a simple way to use the old techniques in a manner designed to get around the time problem.

Saunders, off his own bat, came up with his adjusted weight method (which upset the apple cart somewhat at Boeing as that was not the done thing .. another story for another time, perhaps).

The technique replaced the normal weight addition by the addition of a concatenated set of "numbers" where the weights were rounded to the nearer 100 and the final two digits became a CG-related value. If the system were set up carefully, the addition of a set of numbers could provide the loaded weight, CG, and stab trim setting in the one calculation. The method was adopted by a number of airlines and, once folk were trained and practised in the procedures, the sums could be run very quickly indeed.

Once the general introduction of mass-produced computers arrived in the next decade, the technique rapidly became a bit of a dinosaur process and was replaced by using computers to do the standard number crunching.

So far as error is concerned, the technique introduced a deliberate error. However, provided the aircraft was reasonably large, the magnitude of the error got lost in the general calculation noise and was addressed by the usual curtailment methodology. Saunders' assessment was that the technique was not appropriate to aircraft with MLW less than around 80,000 lb (ie around 35-40 tonnes) providing that certain constraints were observed in developing the technique for a given aircraft Type/Model.

I understand that a few operators still use the technique but, in essence, it is dead and buried. I am not aware that it was ever used in Australia.

You can presume not to come across it in action and, in any case, it would not be seen in smaller aircraft so not a technique with any relevance to basic pilot training.
Engineering specialist in aircraft performance and weight control.
3 years 9 months ago #65
Last Edit: 3 years 9 months ago by John.Heddles.

Comments for this sheet are much the same as for the J160-C - both the POH and the trimsheet really need a rework to bring them up to an acceptable standard.

The example worked is for Empty 275/49.5, crew 185, bags 8, fuel This email address is being protected from spambots. You need JavaScript enabled to view it.. The trimsheet is plotted as per the POH instructions; the deltas with the longhand calculations are a bit average.

Keep in mind that the trimsheet envelope exhibits no curtailment constraints so the "errors" could easily see the loaded aircraft outside the POH envelope. Just don't end up in court trying to explain things to the learned folk after an accident ... 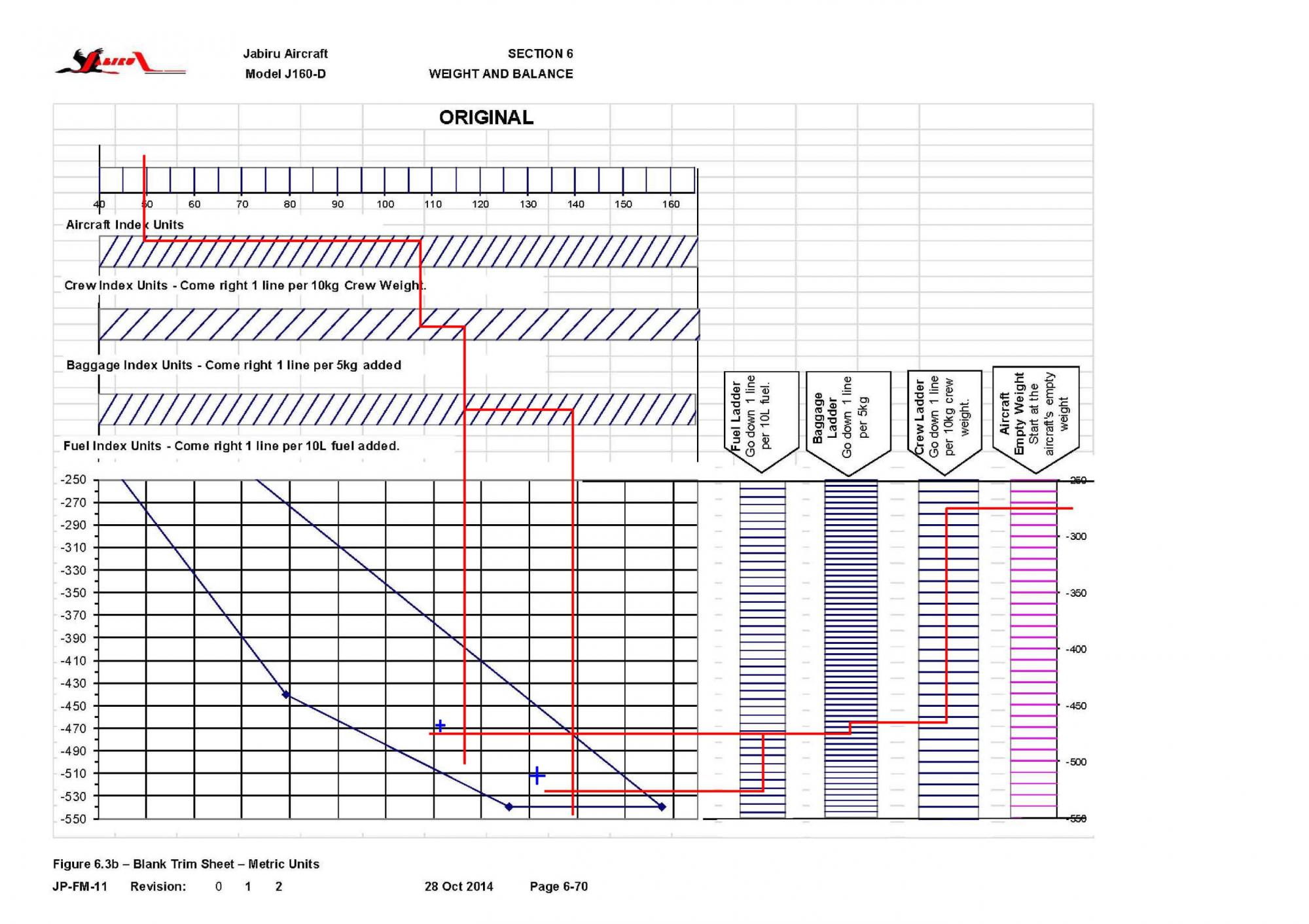 On a general basis, I have comments similar to the J160s.

However, the trimsheet has one quite serious and significant error.

A caveat here, if I may. Due to the nature of LSA certification, I don't have access to any independent data sheets to check on the POH data .. ie, it's the POH and nothing else. The POH has two references for the CG envelope (p6.53 and 6.54) which give the upper forward limit as 255 mm. However, the trimsheet is drawn for 233 mm which creates a non-conservative region at forward high weights. There exist a number of concerns with this, including increased stall speeds (ie reduced takeoff and landing speed margins if the aircraft is operated in this region) and reduced flare control capability during landing.

What I suspect has happened is that the designer has transferred, inadvertently, the J160 CG limit to the J170 calculations. No major problem here .. mistakes are part of human endeavour. What is a concern, though, is that the OEM's checking systems have let this error go through to the keeper. I have alerted the OEM to the matter and, no doubt, Jabiru will, in due course, amend the POH to correct the error.

In the graphic, the dotted line represents the apparently correct envelope. If you are flying one of these aircraft, I would urge you to use the constrained envelope pending a POH amendment in due course. Again, I have used the POH prescribed technique to complete the trimsheet and, again, that just accentuates the resulting discrepancies. 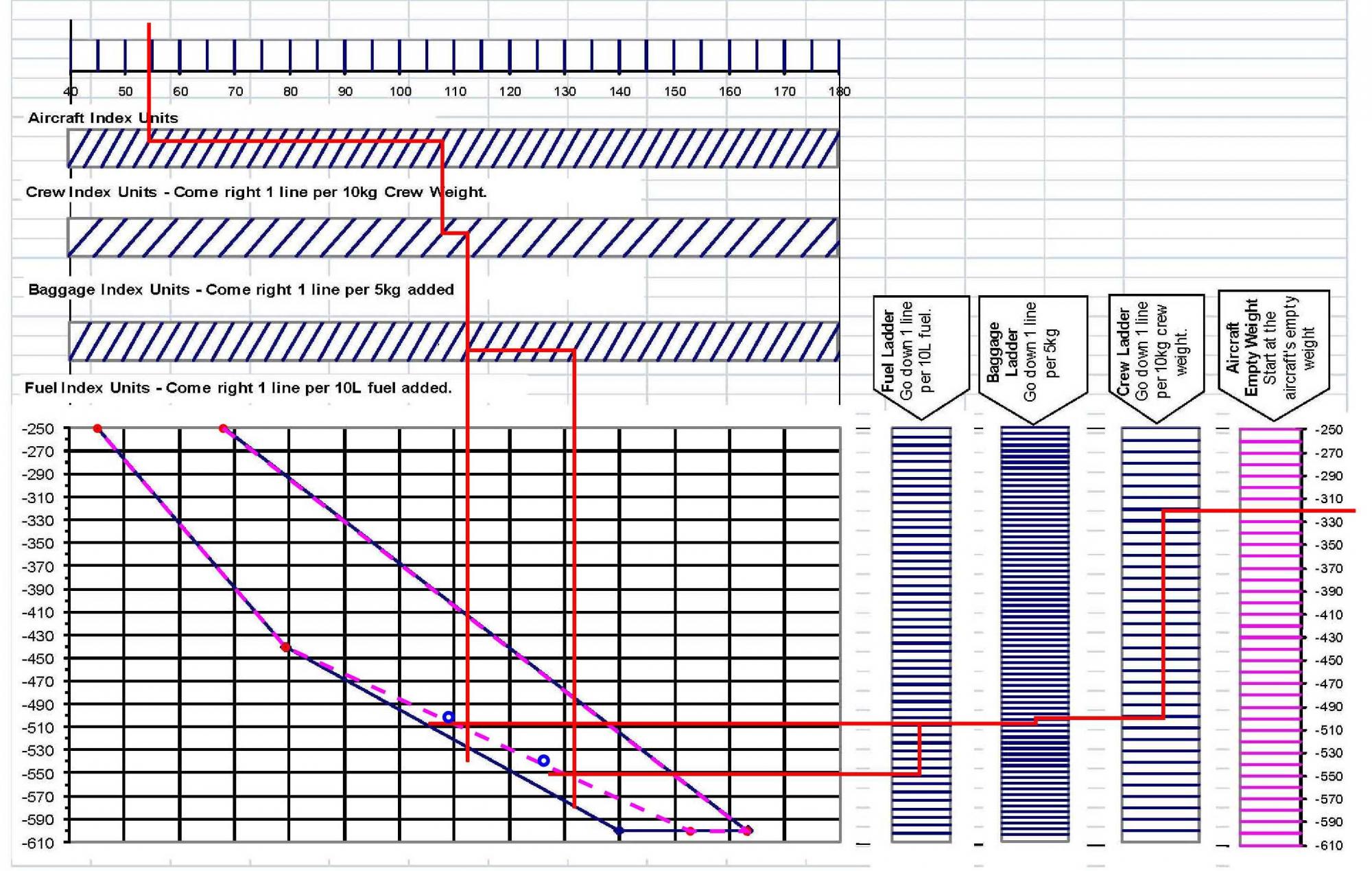 Is it unreasonable to presume that CASA would have detected the envelope error during the initial approval of the model's design and certification ?
3 years 9 months ago #68

LSA certification is not a specific area in my engineering background.

However, from what I am aware, for this class of aircraft, the whole shooting match is devolved to the OEM and CASA doesn't get to oversee things in the way it would for a normal certification process. The OEM is responsible for complying with the ASTM requirements .. which look a bit like much of FAR 23.
Engineering specialist in aircraft performance and weight control.
3 years 9 months ago #69

Which possibly led to this